MESSAGE FROM THE CITY MANAGER

In October 2016, the City Council authorized the release of a Scope of Work to conduct a Fire Services Fiscal Review. This webpage will be a repository of any information collected and actions taken regarding the effort.

The effort first began in 2013/14 when the Town sought out data for its Local Municipal Services webpage. The Local Municipal Services webpage is designed to inform residents about the various services and service providers they use as residents of the Town. When preparing the webpage, an issue arose related to the property tax revenue received by the Fire District from Atherton residents. It was thought that perhaps revenues could have outpaced the cost to provide fire services to the community. The District’s 2016/17 Budget reflected 8,547 Calls for Service in 2015. The map of each call with the Town’s boundary superimposed is shown below (the underlying call image is from the District's 2016/17 Budget Document) (PDF). 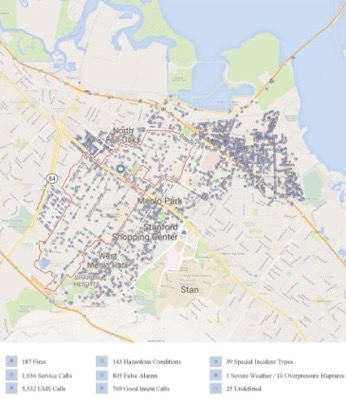 The image reflects that the bulk of calls for service from the Fire District are provided to areas outside of the Town of Atherton. 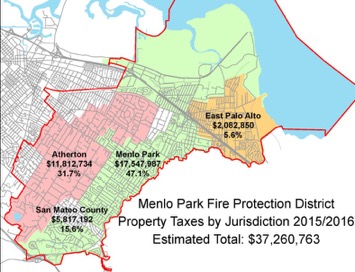 The Council wanted to know with more specificity, what the costs were to provide services to Atherton residents. In response to this question, the District advised that they did not collect data in that way and were unable to provide a detailed answer. Acknowledging that response, but still seeking an answer to the query, the Council directed that staff put together a scope of work to get at the data they were seeking. The District advised that while they would not be actively participating in the Study itself, they would continue to provide whatever information they had available via their website.

Second, what are the actual costs for services received by Atherton residents? To get to that data, the consultant extracted the cost of services attributable to the Town and its population and land use demographic. Because the District serves multiple independent agencies within its own District boundaries, they do not segregate services (or data) by jurisdiction. The District provides services District-wide. As a result, the consultant parsed the data by jurisdiction to the maximum extent possible, inclusive of any overhead and special services provided by the District, District-wide. For example, while the Town only has 1 Fire Station within the Town’s boundaries, the residents are actually serviced by 5 or more Stations using the “closest unit” model of response. The consultant looked at the community as a whole and segregated out those costs from all Stations attributable to the Town.

Data from the District was provided for calls for service from October 2015 to October 2016 (PDF). During this year period, there were 517 calls, the call breakdown is as follows:

Third, to allow residents to get a true comparative, the consultant was tasked with a third task of determining what the cost of services would be if the Town itself were responsible for providing the services independent of the District. It is anticipated that this cost would likely be more than the cost of services provided by the District due to economies of scale.

The City Council has been clear that the intent of the analysis was not to consider providing services independent of the Fire District; nor is the Town seeking to gain any additional revenue share. At this stage, the intent was data gathering.

However, if after the results, the District and Town are able to identify different service levels or service needs for the Town and have a conversation about how to address those needs, that would be a positive outcome. Also, if the residents of the Town wish to address the issue in some other way, the Council would be participants in those conversations as well.

The issues were further complicated in 2015 when the District completed an Impact Fee Nexus Study and sought to have Atherton, Menlo Park, East Palo Alto and the County adopt the Study and thereby impose a new fee on Atherton residents. The District itself could not impose the fee so each respective jurisdiction was required to impose the fee on behalf of the District. Because the Town would be adopting the Impact Fee Nexus Study independently and vouching for its analysis of need, more data was required to validate the need to impose fees on Atherton residents when the question of property taxes versus cost of services was still unanswered.

Responses to the Town's Request for Proposal were due at 4 pm on March 31. The Town received 4 bid responses:

Tasks 1 through 3 were completed and the completed report was part of the Agenda Item below for January 17, 2018. Matrix completed Tasks 1 through 3 of the Study on budget at $49,500. On March 21, the Council authorized the completion of a Task 4 for the Project. Matrix completed Task 4 for the Project on budget at $13,500. The Task 4 Report was presented to the CIty Council on July 18. On January 22, 2019, the Council held a joint meeting with the Fire District to review the entire report.

Following that meeting, the City Council Ad Hoc Subcommittee met with representatives from the Fire District to discuss next steps and possible ways that the Town and District could collaborate on projects that would address the equity issues raised by the Town.

Discussions and Next Steps

The Town put together a list of opportunities (Attachment 2 to the October 2 Staff Report linked below), that could be discussed by the subgroup. These opportunities were identified as Partnership Opportunities with the Menlo Park Fire Protection District. The intent of the list was to identify those areas of partnership that would assist with mitigating the equity issues raised in the Matrix Study between the cost of fire services and the revenue provided to the District by Atherton residents. A meeting was set for July 23, 2019.

On July 22, the District advised that they had discussed the issue(s) with the Board of Directors and that they would like to explore 5 possible partnership areas. These areas were:

The Town’s Subcommittee expressed disappointment that the District did not wish to address the equity issue and expressed that the Subcommittee would have to report back to the Council and suggest next steps. The Subcommittee also noted that since the Town’s initiation of concerns of equity, the Fire District has expanded their service model through the acquisition of new facilities, new vehicles, development of a regional fire academy, and enhancement of wages and benefits for fire personnel.

The Town, Council, and Council Subcommittee spent at least 5 years working with the District to identify and solve an equity issue between the cost to provide fire services to Atherton residents and the revenue provided to the District by Atherton residents. As of FY 2015/16, the property tax revenue provided by Atherton residents to the Fire District totaled $11.8 million and can be expected to rise each year based on Assessed Valuation. Projected forward at a conservative rate of 3%, the revenue could be expected to be $13.3 million or more for FY 2019/20. The cost of services based on the District’s FY 2016/17 Operating Budget were estimated at $4.6 million. Projecting forward aggressively at 5% per year, that cost could be expected to be approximately $5.3 million.

The Matrix Study identified options for consideration should the Town desire to move forward. Those options are:

Based on the results of the Study and subsequent conversations with the District, it is unlikely that a tax agreement could be negotiated and further unlikely that Special Legislation would be supported. The only option remaining would be to explore further options around detachment by meeting with LAFCO. Meeting with LAFCO does not mean that the Town will ultimately detach from the Fire District and be required to provide alternative services via contract or its own fire department; however, such meetings would begin more formal conversations around detachment should the Town desire to move forward with the option.

Following discussion on October 2 at the Study Session, the Council directed the Subcommittee to meet with LAFCO to discuss the Town's options moving forward.